This is one of the few classes that I like the direction Blizzard took on it. They recognized the fact that Dragon Priest, much like Dragon Warrior, has serious potential, so instead of pushing their own archetype that they want to see, they have chosen, instead, to go all-in on Dragon Priest.

The two Dragon specific cards, being Dragonfire Potion and Drakonid Operative, are both very good. The potion gives Priest back something they lost long before the Year of the Kraken – reliable board clear. The only reason Excavated Evil is run in Priest decks is because they have no better option – now, they do. Even not in Dragon decks, this card is great board clear, and can allow Priest to catch up to games that were previously lost. The Operative is simply a staple in every Dragon Priest deck – a 5 mana 5/6 is already great stats for the cost, and being able to essentially draw you a card is, well, wow! Overall, they’re two incredibly solid cards, which Priest has needed for a while now.

The other potions, (Priest received a lot here), being Potion of Madness, Pint-Size Potion, and Greater Healing Potion are all, in essence, reprints. The healing potion is essentially a larger Flash Heal, only being restricted to friendly targets, which makes sense due to Auchenai Soulpriest being a thing. It’s actually really strong, and I like running at least one copy of it in my Priest decks now. The Pint-Sized is essentially a Shrinkmeister, for those of you who remember him. It combo’s great with Cabal Shadowpriest, as well as the new Potion of Madness, something Shrinkmeister did before as well. Again, Blizzard seems to have realized what they took away from Priest, so they have now made attempts to give them back, which the community seems to have reacted very positively to.

Raza, the Chained is really, really cool. It obviously has synergies with Reno Jackson, who should be run with it, but this card absolutely pumps out potential from Priest. The combos are endless, and especially if used with Justicarr Truehart, a meaty 4 health heal for free every turn is just really good. Used in combination with the various methods Priest has available to them (and even maybe the new Mana Geode), some crazy combos can be used to deal damage, draw cards, gain board control, and more! This card is a great card for Priest to have, and the community could not be more pleased to see Priest not getting the short end of the stick anymore.

The two we haven’t brought up, being Kabal Songstealer, and Kabal Talonpriest, are both relatively sub-par. Again, the Talonpriest is basically a slight rework of Dark Cultist, a card that was used widely before Standard mode rolled around. Still yet again, this expansion is giving Priest back what it needed all along, and it has already started to pay off in the ladder and professional scene. In the end, Priest received some fantastic cards, and would seem to be climbing its way back up to, well, not tier 5! Thanks for reading, everyone, and take care. 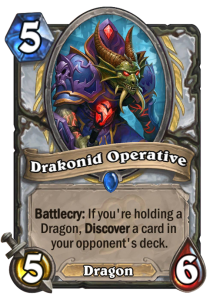 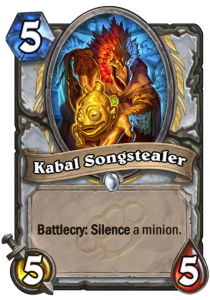 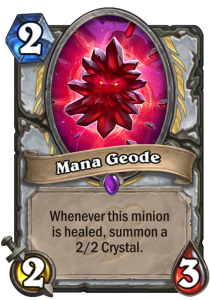 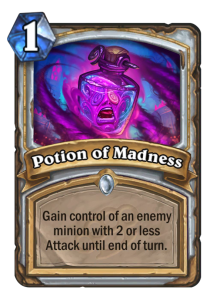